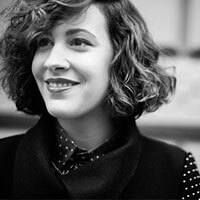 Mirna grew up in a musical environment and she always loved singing, dancing and simply performing in front of people. With 7 years old she started to play piano and since then continued her music education. In 2009 Mirna continued with her classical piano studies at Academy of music in Ljubljana, and started with her jazz vocal studies at Carinthia Conservatory for Jazz and Pop in Klagenfurt, Austria.
The following years she continued with her studies in Klagenfurt, in the class of Caroline De Rooij and Carole Alston, expanding her musical abilities on a completely different level. Next to her studies she attended many workshops throughout Europe, led by famous jazz musicians, such as Danilo Perez, Danny Grissett, Sheila Jordan, Amy London, Anita Wardell, Judy Niemack… and took private lessons in New York from Jay Clayton, Theo Blackmann, Jen Shyu and many others. In October 2011, Mirna was one of the winners of Marianne Mendt Jazz Festival competition in Austria, became a member of the house band of the Jazz Club Kammerlichtspiele in Klagenfurt and had many concerts around Austria and Slovenia with various projects.
Since 2012 Berlin is Mirna’s new home, and the great Jazz Institute Berlin is where she is continuing her studies, going deep into the jazz tradition, finding her own voice and taking many different paths in this never ending world of rhythmic improvised music. The people to guide her on this journey are her great professors; Judy Niemack, Greg Cohen and Kurt Rosenwinkel. She is a holder of Ministry of Slovenia’s scholarship for talented students, a member of the famous German National Jazz Orchestra BujazzO and a member of Yehudi Menuhin Live Music Now, Berlin. She’s taking part in many different projects, collaborating and performing with various music ensembles around the world.