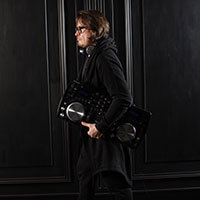 Christian Siskovic is a colourist hairdresser with a special taste for colour, beauty and shine. But he is more than this: he is an artist known as “paSCa”. A former dancer, collector of long play records, he is the author of music compilations. He loves cats and food. But Christian Siskovic is also a recycler, who blames the grey tones, and looks for the opposing black and whites. His first lamp was so dark and its light so white that it seemed almost unreal.
A man with no bonds, who felt at ease eveywhere even if never really feeling at home anywhere. Originally from Trieste he settled in Ljubljana in 1997. Once his refrigerator broke and then he had the brilliant idea of light. He built his first lamp using wire netting.
Christian is still creating and, as artists do, his imagination lead him to unusual ways, his music, his lamps and his colour are always with him but now he is ready for a new challenge, and this time he is writing a book. He recently moved back to Trieste, where, with the sea and the special atmosphere of the city, his inspiration continues.