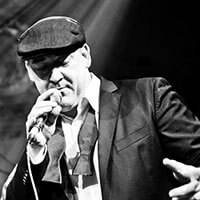 Born in Huntingdon, Cambridgeshire “Bohemian Rhapsody” was number 1 in the U.K. charts. That set the tone for the diversity of styles and disciplines Carl would later perform.
At 6 years old he appeared on stage for the first time with the “Sunday School Church Choir” and very soon became a regular performer in school plays and musicals. It was in such musicals as “Grease”, “Cats” and “Joseph and the amazing technicolour dream coat” that Carl learned close harmony singing and stage performance.
After a break from singing to pursue a D.J.ing career in the late 90’s/early 00’s, Carl left The U.K. to once again learn more about his vocal art. Touring the Mediterranean between 03’ and 06’ Carl made hundreds of performances in a massive collection of venues, learning the art of “Cabaret” and “Night Club” singing.
In 2006 Carl relocated to Vienna where he currently lives. Since being in Vienna Carls has seen some success on T.V. and Radio with yet more styles and disciplines that include “Gospel” choirs, “Big Band Jazz” and “Soul“ arrangements and even “Rap”.
His involvement with the Viennese “Funk/Soul/Dance” arrangement “RAMON” has seen him performing alongside such acts as “Bootsy Collins”, “Kool and the Gang”and “Mario Biondi”. Other artists that Carl has worked with include “The Stereo MC’s”, “Richard Dorfmeister”, “Rodney Hunter”, “Langoth” and Camo ‘n’ Krooked”.
Carl Avory has an incredible range of vocal/stage talents that can only be the product of decades of experience and love of his craft. In short, he is passionate beyond belief and loves nothing more than entertaining. From small club shows to large festivals. Carl brings “Soul and Smiles” to his audience.