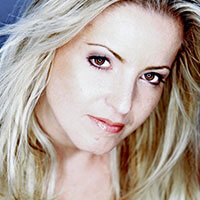 Born in the The Czech Republic , MISHA received her training in Dance, Singing and Acting at the Music and Arts University of the City of Vienna. Before completing her graduation she made her debut in Roman Polanski´s TANZ DER VAMPIRE playing the role of Sarah. Soon after followed starring roles (Lisa and Lucy) in JEKYLL & HYDE - Metropol Theater Bremen, Musical Dome Cologne, the role of „Jessica“ in DIVAS - Metropo Theater- Vienna, and as the soloist in BRAUNSCHWEICH BRAUNSCHWEICH TheaterBraunschweig. She played “Ozzy Osbourne” in the original German cast of the QUEEN Musical WE WILL ROCK YOU in Köln, and played three roles (Marionetta, Julia and Antonia) in the World Premiere of Frank Nimsgern's PHANTASMA. Other roles include the title role in EVITA- Theater Lübeck,Theater Trier, Hessisches Staatstheater, Staatsoperette Dresden, “Empress Elisabeth” in LUDWIG II – Kempten Onstage, and Snow White in Frank Nimsgern's SNOWITE-Opera Bonn. M!SHA has performed as a soloist in countless Galas and concerts including QUEEN AND PAUL RODGERS- Rhein Energy Stadium Cologne. She was the frontwoman for the girlgroup T.KAY.OH, and went on a European Tour with Rapper LUMIDEE. For the ZDF New Year's Gala-WELCOME 2012 she entertained millions of viewers from Berlin's Brandenburger Tor. Recently she toured Europe as a soloist in MUSICAL ROCKS! Presently the artist is concentrating on her recording career, and is writing her first album. Her song- “You Can't Bring Me Down” has been recently released, and has already been performed on German and Austrian TV. Rock LegendBrian May(QUEEN)gives M!SHA's new single aglowing endorsement