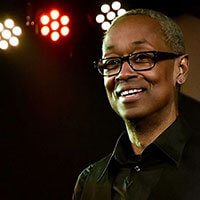 Eddie Cole is a US artist who performed with several international artists. Such as Diana Ross, Tom Jones, Aretha Franklin, James Brown, Nana Mouskouri to name a few. He started his career as a regular member of the 70's cult TV-show SOUL TRAIN; showing his creative dance moves to people all over the world.
He came to Austria as a part of the duo "ESSENCE" in the time when MTV was new. Although the main focus was always music he also branched out into the modeling scene. These days you can catch Eddie Cole in many places.
He is performing with "A TRIBUTE TO BLACK ICONS", "PRIME CUT", "COLE & KEYS", CRAZY HAUER BIG BAND" or 'THE VIENNA BALLROOM ORCHESTRA". He is also present in musical theater, where he's been the voice of the plant in "THE LITTLE SHOP OF HORROR" or a revue with "THE BLUE MOON EXPERIENCE". Beside all of that Eddie Cole has also been the voice on many TV & radio commercials in Europe.